+304378
To bookmarks
Mortal Kombat X - is a legendary fighting game that has millions of fans in different parts of the globe, migrated to mobile platforms with the Android operating system as a tooth-crushing slasher. The gamer is invited to plunge into a cruel world full of adrenaline action, dynamic fights ending with effective combat combinations. Take part in the greatest deadly competition, between many dimensions, which take place over many thousands of years.

Choose your character from among the old or fresh participants of the tournament. Enter fights with opponents, apply a series of crushing blows with hands, feet, elbows or knees and win. For each victory will be awarded game points that can be spent on pumping combat skills of your hero. Fans of the classic style will be delighted with fighters like Sub-zero able to freeze opponents at a distance or Scorpion releasing a long snake from his hand. You can also remember the dark-skinned big man JAX with iron cookies, the lightning God Raiden and the Prince of one of the worlds of the four-armed Gorro. All these and many other gladiators are waiting for their turn to show their skills in the arena of death. Each of them has his own reason, which led him to a Deadly Battle, hoping to return home the absolute champion. The developers have put a lot of effort creating a familiar image and new styles of characters in the game, each has its own original style of combat and unique pumping skill with skills.

A distinctive feature of the games of similar genres can be considered that Mortal Kombat X quietly works without an Internet connection. Therefore, You can safely enjoy a virtual massacre in any place, regardless of the wifi or mobile data. Gather teams of up to 3 people and switch between them during the fight. Tired of humiliating artificial intelligence, hunting real rivals, connect to faction wars.

The control system is carried out by taps on the scoreboard, and therefore allows you to fully experience the pleasant moments of the game. Press several times on the display and be able to play a deadly combo. Swipe your finger in different directions, performing the main techniques and captures. The graphics are great. Slow down watch as enemies ' bones come out of their bodies, hearts break, brains fly out and piles of blood. Despite the enormous investment of the creators, the application is distributed free of charge. 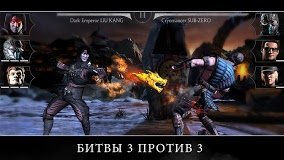 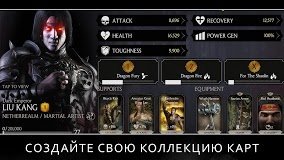 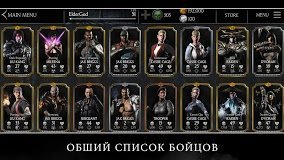 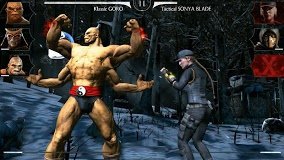 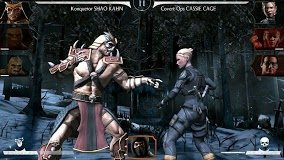