+1014
To bookmarks
World Soccer League - a popular sports game simulator from the developers of the Mobirix Studio. The database contains more than sixty national teams, more than fifty titled clubs in the world and more than 3,000 unique players. The app's features will give Moussa pleasure even to the most pampered users. Football world League will allow everyone to feel like a real coach and lead the players to the coveted trophies.

The game process offers you to test your skills in a number of modes. In training, you will learn the basic course of management and behavior on the field, in a quick match you will be able to train feints and learn how to maneuver more correctly, protecting the ball from defenders. Leading your team to victories in regional Championships and ranking high in world tournaments, you get invaluable experience, cash rewards and additional bonuses for new transfers. After 3-5 hours of familiarization, you will make huge progress and will be able to make unthinkable strokes and tricks, just getting into the frame of the opponent's goal and skillfully performing standard strikes.

If you need to save your favorite moment in a match, you can create short videos and take photos of the screen. The graphic design is hardly first-class, but the pixels do not hurt the eyes, and the physics of the athletes ' movements is quite realistic.

The interface is a familiar configuration for many users. In the upper corner is a timer and the current account of the mast. On the left side there is a running direction joystick that is responsive and easily configurable. In the middle is the name of the player who is currently under control, as well as a schematically drawn field with a dynamic movement of 22 people. On the right is the menu of strikes and passes. Long and short passes are available, and when they are clamped, the force of the leg swing changes. A special technique is designed to perform strokes and feints, with a simple click you can easily deceive your opponent and push the ball between your legs or throw it. 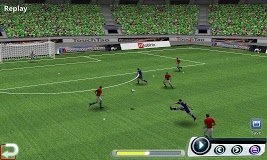 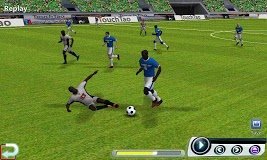 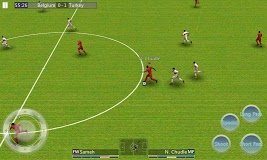 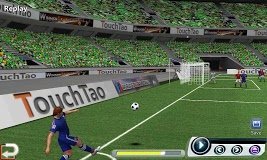 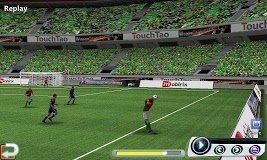